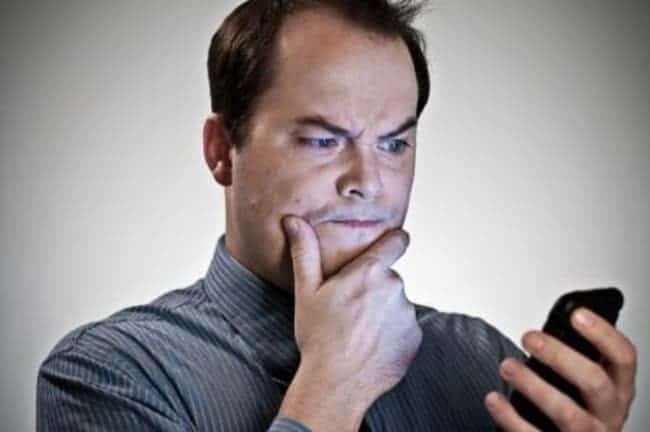 A problem a lot of people are running into in their daily lives nowadays is that they get heart palpitations or anxious responses whenever their phone rings or receives a text. They can startle and feel a jolt inside as soon as they hear their phone go off and this can lead to a heightened state of arousal and anxiety for several minutes or several hours afterwards. What is the cause of this and how do we go about resolving it?

The most common cause of this is that we are attaching some kind of danger or threat to the phone ringing and so the first thing to do if this is happening is to look carefully at your personal and work relationships to make sure there are no toxic dynamics going on which could be causing this anxious “on edge” response.

Startling or “jumping” when the phone goes is not a normal response and so needs to be looked into further. Whilst the real root cause may not be so obvious at first, there are almost always some kind of dysfunctional dynamics going on here that can be identified and remedied.

Having your limbic system constantly on alert in this way is not good for your health long term. We are all aware of the fight or flight response, when our body changes physiologically and gets ready to ward off a threat, but in evolutionary terms this is meant to ward off imminent physical external threats and not kick in just by the phone going off. Let’s look at some possible causes of this in more detail.

A Common Symptom of Toxic Relationships

The first thing to look into here is your close work and personal relationships. From personal experience and the accounts of others, this palpitations/heart jumps/fight-flight response whenever the phone goes off is very commonly associated with having toxic people in your life, whose patterns of interacting have left you with an underlying anxiety that can manifest when the phone goes off.

This can happen very often if you are caught up with someone with any of the more serious personality disorders:

The underlying motif here is often “Oh, no, is that them again?“, which kicks off this “jumping” or anxious response inside as we wonder what the latest drama or argument is they are hitting you with on the phone. This can be a partner, or a work colleague who keeps ringing you out of work, bothering you with stuff when you are meant to be off.

The video above contains and excellent of how this relentless drama and anxiety dynamic can unfold when dealing with the so called Dramatic or Cluster B personality disorders – psychopath/sociopath, narcissist, borderline. See here for the full video from  which the clip was taken.

When asked if he jumped whenever the phone rang during the relationship (it’s a common reaction so Dr Smith knew to ask about it), he confirmed this startle response:

“She would text me with always these chaos scenarios so every time I heard my text go off or my phone ring, immediately like heart palpitations and panic attacks..What’s going on, what’s wrong now…….I just want to stress how toxic these people really can be”

The second account is from co-host Dr Smith himself right after at the 59 minute mark, who details how a borderline personality patient of his created the exact same response in him:

“Got a couple of guys calling in tonight talking about being traumatized by these relationships, and traumatized is a fair word to use. I had a patient one time that was real bad borderline…Just having her anywhere in my world gave me PTSD symptoms to the point where I jumped when my phone rang.

She would intrude on my mind at just random times, it was horrible, and that was just a small taste of  what having someone in your circle with BPD can do to you”

As the callers and commentators mention, these relationships are no joke and can leave people with severe anxiety and PTSD style symptoms, of which the heart palpitations and jumping when the phone goes off are just a small part. It can take years to fully recover.

I personally have also had similar scenarios with a couple of sociopathic bosses. There is a shades-of-grey difference here since bordelines are often doing this out of a desperate fear of abandonment, whereas psychopaths and sociopaths are doing it on purpose to unsettle you and chip away at you psychologically. In a sense it doesn’t matter because you end up in the same unhealthy place and need to set boundaries to stop it.

This dynamic of toxic relationships is probably the most common cause for this startle response when the phone rings. However at the risk of reducing it to one single cause and effect, there can be some other contexts in which this is happening. Here are some other causes, though they all tie in to the basic issue of anxiety:

If you are finding this reaction happening a lot in your life and it is really starting to bother you, then there are ways to treat this anxious fight or flight response. One of the main ones that can be quite easily self administered is to use bilateral stimulation.

Bilateral stimulation or BLS involves providing some kind of visual or audio stimulus to focus on externally whilst also focusing on an internal state of distress, such as the anxious, heart jumping panic reaction that can keep coming up when the phone goes off.

It is a crucial part of a specific psychotherapy called Eye Movement Desensitization and Reprocessing or EMDR, which is specifically designed to treat PTSD, anxiety and other conditions which can lead to this fight-or-flight state of internal arousal and distress.

The therapist will tap a client in a distressing memory or state and then move their hands backwards and forwards to give them something else to follow whilst also focusing on their internal state of distress.

The idea is that by providing the mind/brain with something else to focus on externally, it distracts it from focusing purely internally on the distressing state, which allows it to “blur” out the intensity of the anxiety and lessen it’s hold over the person. They are able to put some distance between themselves and the internal state.

The use of this bilateral stimulation method within EMDR has proven to be remarkably effective in resolving trauma, anxiety, panic attacks and other conditions which can lead people to get stuck in these distressing internal states of anxiety, worry and rumination. It is a powerful way of stimulating the mind into processing the psychosomatic states of over-arousal to resolution.

However, bilateral stimulation can also be self administered, which can be very helpful for these toxic relationship dynamics which can have you totally preoccupied with when the phone is next going to go off, and jumping whenever it does.

The idea here is to “catch” this state of anxiety whenever it pops up, and self administer some form of bilateral stimulation to essentially distract the mind away from focusing purely on what’s going on inside. Here are some videos you can use to self administer bilateral stimulation – follow the dot on screen whilst the anxious fight-or-flight response is “live” within you.

Here are some more self adminstered EMDR videos on Youtube, which all follow the same kind of principle of providing something for you to follow on screen whilst focusing on an internal state. Click on each one to pop up the video.

I have personally found this very effective in calming these internal states that toxic relationships and other factors can bring up in you with things like the phone going off. It pulls you out of the preoccupation and rumination that can so often accompany these patterns and can lessen or eliminate any responses that do come up.

Another tip is combine audio and visual bilateral stimulation together for an even more powerful combination to process states of internal distess. This means watching the video along with having a recording such as this one from EMDR practitioner Dr James Alexander playing through a set of headphones. This gives the brain even more distractions and can serve to more powerfully process states of anxiety and stress.

The bilateral stimulation method can be a more immediate way of dealing with whatever states toxic relationships or other unresolved stuff can bring up in you when the phone goes off or some other external stimulus.

However, you will probably also need to implement some other broader strategies to get these toxic influences out your life. Being trapped in constant states of anxiety and fight-or-flight responses is not going to be good to anyone’s mental or physical health over the long term.

The first thing to do is to set boundaries with the people in your life who you can see are causing these patterns. This is the most important tip for suriviving all relationships in today’s world, but most especially with toxic people. Most of the time this intrusion into your life is happening because you are allowing it to happen.

It is important to be very clear to intrusive or high drama people that texting at all times of day, or texting on days off if they are a work colleage, needs to stop. If you think the person has a more serious personality disorder like BPD or psychopathy then you need to exit the relationship with them altogether as soon as possible, since these people rarely if ever change their toxic behavior patterns.

See the boundaries section of our book page for some excellent resources on setting boundaries in relationships. This is a crucial first step in getting control of your relationships back from toxic people and having weak or diffuse boundaries is a common problem for good people who get sucked into these bad relationships which drain and traumatize them.

Here are some other general steps to take if you find yourself having these panic reactions whenever your phone goes off: