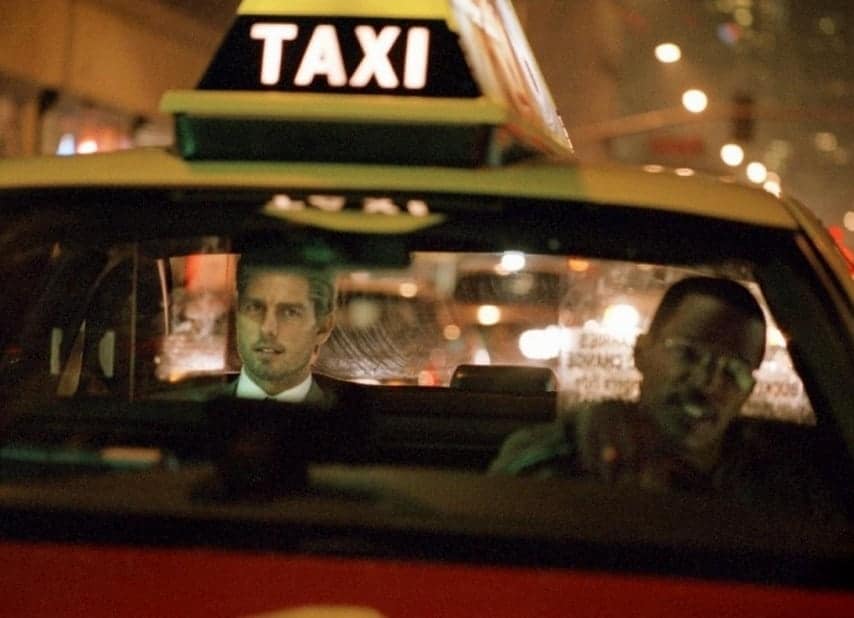 Michael Mann’s 2004 film Collateral is another excellent character study of a psychopath; a stylish action thriller starring Tom Cruise and Jamie Foxx as the two leads engaged in a strange relationship which turns into a game of cat and mouse around the downtown area of Los Angeles.

Cruise plays Vincent, a professional hitman hired to kill several witnesses in a high profile drugs case. Foxx plays Max, an everyday LA cab driver with aspirations to run an upmarket limo service. Jada Pinkett Smith plays Annie, a prosecutor who gets tangled in proceedings and later turns out to be one of Vincent’s targets, since she is the one prosecuting the case.

The film casts Max as being caught in a lottery win style coincidence, since he ends up giving cab rides on the same night to both Annie and Max, not realising until later that their paths intersect in a very strange and dark way. Vincent hitches a night long cab ride from Max, driving round to different destinations around LA allowing him to do his “meets”, which are really executions of witnesses in a drugs case.

It is not long before the real reason for these meets is revealed and Max is held hostage by Vincent, forcing him to drive to his locations to carry out the executions on his list. Max is horrified but can’t fight back against the trained marksman Vincent. When he later realizes Annie is the last target on the list he takes steps to protect her and take out Vincent.

Normal Relationships vs The Psychopath

The film provides a continual underlying subtext of normal human beings and human connections versus psychopathic people, clearly showing the difference between the two in multiple scenes. Cruise plays an utterly psychopathic and inhuman character in Vincent, completely cold and detached from the emotional consequences of his actions in killing others.

Foxx and Smith by contrast play the opposite, as normal, decent human beings with aspirations and emotions. The contrast between the two is brought out very clearly very near the start of the film, when we see Foxx engage first with Annie and then Vincent in conversation in cab rides.

There is an authenticity in the conversation with Annie. At first she is a little formal and business like, being a legal professional, but over the course of the journey she starts to feel comfortable with the uncomplicated and honest Max and they open up to each other, confiding their fears, weaknesses and aspirations.

Max ends the journey feeling he should have got her number, so well has he clicked with her over the journey, and in what turns out to be a very important stroke of luck for Annie’s sake, she comes back and gives it to him.

Very soon after, Cruise’s Vincent character hitches a ride with Max, and we can clearly see a gap or chasm there in how they relate, and this only grows wider as the film progresses. Cruise is sharp, snappy, bright, responsive, seemingly very nice and friendly, but something is different, something is missing, and Max senses it.

He feels confident opening up about his aspirations to start a limo company with Annie, but he holds this back with Vincent. He doesn’t quite trust him or feel as comfortable with him, despite him seeming very personable and (initally) saying all the right things at the right time.

This difference is very well portrayed and is an apt depiction of what one expert on psychopathy has said about them : “Psychopaths can sing the lyrics but they don’t respond to the melody of normal human interactions and emotion. There is something missing”. They can do and say all the right things but there is a crucial thing missing there that can be sensed, even if not articulated, by most people – the lack of real feeling or emotion.

Normal Human Conscience vs The Psychopath

Max’s initial gut feel is proven right when the dead body of Vincent’s first hit lands on his cab while he is waiting for Vincent do what he thought was a contract signing or something harmless. From then on any pretense is broken and Vincent is happy to reveal himself to Max for the stone cold psychopath he is, forcing Max at gunpoint to take him round LA while he completes the other hits.

Max is shocked and horrified as any normal person with a conscience would be, and initially refuses but Vincent doesn’t see what the fuss is about and demands Max take him to complete the other hits. “I’m not up for this. It’s not my job” pleads Max “Tonight it is” Vincent coldly responds. Cruise plays the emotionless, heartless aspect of a psychopath perfectly and Foxx is the perfect counterfoil as a normal person with a heart and conscience.

As Max tries to question and reason with Vincent as to why he does what he does for a living, he sees the full psychopathic uncaring personality of Vincent with a growing sense of horror. “Six billion people in this world, and you’re getting out of shape because of one fat guy”, he says, referring to Max’s perfectly normal horrified reaction to having the first hit land dead on his cab.

Vincent has a constant barrage of clever answers, intellectual mumbo jumbo and rationalizations to try and downplay and minimise the reality that he is killing people. “You just taking out the garbage?” Max quizzes him, trying to get him to realize what he is doing. “Something like that” Vincent responds, and that’s literally what killing has come down to for the psychopathic killer. It’s like tying the shoelaces or buttoning a shirt up.

The dark cloud of Vincent’s character that hangs over Max during the film does bring with it some silver linings, which are portrayed with a clever humor during the film. In a strange kind of way Vincent’s abrasive, audacious “alpha” character does actually empower Max’s repressed, restrained “beta” character and brings some forthrightness and ability to act the act and “talk the talk” out of him.

Put differently, Vincent teaches Max’s sensible, conscientious character to “not give a fuck” in certain situations where it might help him. He implores him to stand up to his exploitative cab firm boss who wants him to pay for the damage caused to his cab and Vincent helps Max tell him where to stick it, something Foxx’s character would not normally do.

Later on Vincent also sends Max right into the lions den, making him go to Vincent’s hit job employer, posing as Vincent, to get details of the last two hits. The idea of Max being a hitman is ridiculous but amazingly he pulls it off, and does so by reciting some of Vincent’s cold, clinical, “alpha male” dialogue. He gets the details, audaciously screwing over Vincent by discounting the price for his services, and they carry on.

Whilst being completely unable to connect emotionally with Max, Vincent does also provide some insightful observations about Max which hit the mark. Psychopaths can do that, being very observant and calculating people, if emotionally empty.

To keep up the facade of normalcy, they go and visit Max’s mother in hospital, and when Max later laments how his mother always puts him down in front of others, Vincent correctly observes that parents often project their own flaws onto their children, disparaging in them what they don’t like about themselves.

He also digs through the veneer of Max having his “plans” to build a limo business, observing that he has been driving cabs for 12 years now and would have made his dream come true sooner if he was really a “doer”. He also implores him to contact Annie if he makes it through the night, not realizing at this point she is his last target.

In these scenes Vincent’s nihilism and “don’t give a fuck-ness” actually lead him to give good life advice to Max and give him the kick in the butt he needs to take some action. His brutalness is not nice to deal with but also allows him to cut through the crap and see self deception and “chit chat” about dreams and ambitions people have for what it is.

Empathy Versus the Psychopath

Max eventually gets sick of Vincent’s constant rationalizations and excuses for the fact he is basically living an evil existence, killing people on a sheet of paper and anyone else who gets in his way without a second thought. He directly confronts Vincent’s psychopathy and metaphorically puts a gun to his head to point out what is missing in his psyche.

He propositions to Vincent that if a gun were to his head with the deal “You gotta tell me what’s going on with this person over here, or I’m gonna kill you” and correctly points out he couldn’t do it. “Standard parts that are supposed to be there in people, aint there in you” he continues.

Of course what Max is referring to here is the lack of empathy for which psychopaths are well known. Vincent cannot put himself in the shoes of another person emotionally and so suffers no emotional consequences for the acts he commits towards others, the ruined lives and opportunities of the victims and their families. It’s nothing to him. They can’t relate to people emotionally.

Max tries to reason with him on a human level but all he gets back is a brutal barrage of cold, intellectual excuses and cleverly turning the issue of empathy back on Vincent actually irritates him and causes him to start poking holes in Max’s life.

A tense showdown results and the final scene and final words of the film by Vincent offer a glimpse into the real nihilism and emptiness of his life, with all the fancy intellectual talk stripped off. His whole life has been for nothing and even in his last words he cannot say anything truly emotional or meaningful and resorts to the same cold observations he has been making throughout the film.

Collateral is a fantastically stylish film set in LA and offers a psychological study of normal human values, like empathy, compassion and aspiration versus psychopathic traits like power, dominance, coldness, lack of empathy and emotion.

Click here for other films in our Psychopaths in Film series.