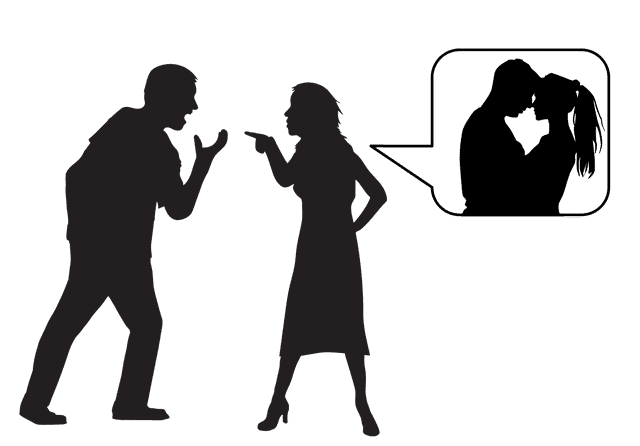 Rampant cheating and infidelity is a very common pattern observed by the the unfortunate people who get tangled up in intimate relationships with psychopaths. But what actually motivates this hurtful behavior from the psychopath? What do they gain out of it?

The reason psychopaths cheat on their partners so much is a combination of deeply ingrained personality traits such as arrogance, entitlement and poor impulse control, sometimes also combined with a premeditated desire to cause emotional harm to the partner. A psychopath’s episodic personality is naturally inclined to cheat anyway, but they sometimes also do it as part of a premeditated game they play with their victims.

As twisted as it sounds to normal people with empathy and a conscience, psychopaths actually derive pleasure from harming and hurting others, and engage in a predictable cycle of grooming, devaluing and discarding victims with a cold detachment, with cheating often a big part of this game.

This is just one of many reasons why psychopaths are to avoided and escaped at all costs in relationships, since the emotional havoc they can wreak on others with their toxic behavior can take months or years for victims to recover from. To the psychopath, all this is nothing, as they drop their victim cold and move onto the next unsuspecting target.

Let’s look at some different aspects of the psychopathic personality and motives which explains why they engage in such rampant cheating so often in intimate relationships.

One of the first aspects of the psychopathic personality is a sense of arrogance and entitlement that automatically lends itself to cheating in relationships. The psychopath doesn’t care if they are already meant to be “with” someone. Morality and rules are for these “other weak people around me”, according to the psychopathic mindset.

If they see someone or something else they want, they go and get it. It’s as simple as that for the psychopath.

This means they act without the same moral restraint that normal people do. This can come across as a brazen confidence and fearlessness that can actually be attractive to the opposite sex.

This is well depicted for example in Leonardo DiCaprio’s performance in Wolf of Wall Street for example, as he cheats on his wife with a brazen confidence as though it’s nothing.

He sees someone else he wants and he gets her. If his wife, or anyone else, gets hurt in the process, too bad, his needs come first. The psychopath brushes off the emotional consequences of their actions on others.

Added to this is the poor impulse control for which psychopaths are well known. Many of them tend to act first and think of consequences later, though it is also true they can be very calculating and pre-meditated – see more on this below. It can play out both ways.

But the clinical research on psychopaths does show poor impulse control to be a common factor. They do tend to do things without thinking, including cheating on their partners and spouses, and they also don’t feel guilt or remorse afterwards. They don’t have the same moral and ethical brake-checks normal people do.

2. Psychopaths Need to Stay in Control

Another reason for this rampant cheating by the psychopath is a constant need for power and control. They are constantly seeking power and control over others, but they do not react very well to even the idea that someone else could control them.

The psychopath needs to be in control the whole time, and this includes in personal relationships. The very idea that they could be somehow restricted or tied down, even by proxy in the form of being in a supposedly monogamous relationship, actively irritates the psychopath, who feels entitled to do whatever they want, whenever they want.

This also ties in a little bit with the arrogant and entitled mindset we just mentioned above. A psychopaths looks down on the morality and “rules” of normal people with disdain, considering themselves to be above them.

Here would be a good way of summing up the psychopaths views on morality and others:

“Other people may follow these things they call “rules” and “morality”, but I don’t. I’m above all these restrictions. No one tells me what to do and controls me. I do whatever I want, and I’ll sleep with whoever I want”.

3. Psychopaths Don’t Value People For Themselves

This is another crucial factor in why psychopaths cheat on others, and something many us simply don’t test for in relationships. If we did, we would root out these characters far more quickly.

Put simply, psychopaths don’t value people for themselves, but only for the feelings, excitement or stimulation they get they are around these people. If ever those things stop for whatever reason, the psychopath will exit the relationship coldly, abruptly and without remorse.

They never valued the person as a human being; they only valued what they could selfishly get out of being around the person, be it a psychological “buzz”, sex, money, entertainment, contacts and so on.

Once they are no longer getting those things off the person, they see no reason to remain in the relationship and quickly discard the person, moving onto someone else very quickly and easily.

To the psychopath, people are not seen as human beings, but as objects to be manipulated and used for their own ends. They view the world and others with a cold detachment, never truly attaching and therefore very easily able to discard anyone who isn’t of use to them anymore and moving onto someone else who is.

This fleeing and escapism could relate to any number of things:

Secondly, there can be an episodic aspect to the psychopath, where they literally just keep monkey branching onto new people, who have something else they are drawn to in that moment. This can literally happen day to day and week to week.

There needn’t even be an argument to trigger this cheating; they just naturally get bored and impulsively “go with the flow” of whoever they are drawn to that day, without any restraints of feeling the need to remain committed or faithful. They are extremely hedonistic and just do whatever they want in the moment.

This again comes back to the hedonistic nature of the psychopath, in that they are constantly seeking entertainment and “fun times” to try and alleviate the constant boredom they feel inside. Psychopaths and sociopaths do get bored very easily, meaning they struggle to stay in committed relationships.

It is sometimes said of psychopaths that they can temporarily force themselves to be nice, caring, kind and committed, but it never lasts too long, simply because they find it boring. They much prefer drama, conflict, mind games and constant new stimulation.

This is why they are not built for long term intimate relationships, often bumbling from one disastrous failed relationship to the next. Their short attention span and relentless boredom just means they get irritated and agitated with “nice” people and harmonious relationships and seek new stimulation very quickly.

If someone better looking or with more status and money comes along, the psychopath thinks nothing about dropping the person they are meant to be with and moving onto whoever has captured their attention in that moment. Very soon though, even this person starts to bore the psychopath and they move on again in this never ending cycle.

Hence, psychopaths are episodics, projecting their own internal unhappiness onto others by accusing them of becoming boring or “crazy”, when in fact it is the psychopath themselves who is chronically bored and dissatisfied with what they’ve got.

No one person can make them happy, because they are deeply unhappy people at the core, and are taking themselves with them wherever they go.

5. Psychopaths Cheat to Triangulate & Play Mind Games With Their Victims

Another more malevolent motive for the psychopath cheating on their partners is that sometimes it is part of a pre-meditated game they like to play, where they groom and charm their victims, before slowly turning on them and then coldly discarding them and moving onto someone else. It is often called the idealize-devalue-discard cycle in the recovery space.

The victim is often left with a whole host of emotional wounds, wondering what they did wrong to make this person suddenly “flip” and turn nasty and abusive. The reality is that the psychopath had planned this all along, viewing the entire relationship with a cold, amused detachment.

It is true that this “flip” that psychopaths and narcissists so commonly make can be seen in a number of ways. In one sense, these characters do get bored very easily as we mentioned, and take this boredom out on others. Their cheating can simply be seen as boredom taking over, without any moral restraints.

On the other hand, some psychopaths approach the whole sphere of relationships as a game they play for their own amusement, getting a “kick” out of charming their way into the trust of others and then inflicting as much emotional distress as possible before discarding them and moving onto someone else. These is definitely intent and planning there with some psychopaths.

As part of this game, once the psychopath has dropped the person and moved on, they will often flaunt their new partner in the old person’s face, just to rub it in.

This is where the malevolence of some psychopaths comes in. They may get bored easily, but why do they have to rub their infidelity in the victim’s face? It is because they do indeed get a pleasure out of causing harm and hurt to others.

The psychopath’s behavior cannot be explained as purely hedonism and shallowness alone. There is deliberate intent to cause harm to others in some cases.

This is why psychopaths need to be avoided in intimate relationships, because they will cheat on a whim whenever they feel like it, and won’t feel any remorse for their behavior.